Embodying Science in The Silver Frame

A Duet between two Art-based research projects at European Open Forum’s festival, Science in the City, at Carlsberg, Dansehallerne in June 2014. 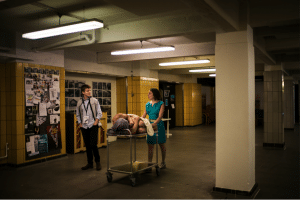 The Silver Frame and Embodying Science

The Silver Frame was born in 2012, when Performance Artist Michael Richardt, moved in with all his earthly processions, in a public installation, for 8 days. The Long Duration Performance Installation, was called Rule Pink, part 1, The Pool of Pink Within is Blood. 24 hours a day the audience could witness, as he would transport matter from a pink square of the center of the installation to the edge of the frame. A symbol of emptying one’s inner space for all that is personal, to contain another human beings story, in his case the story of his mother.

At Science in the City the performance functioned as an artistic basis for dialogue about space and the way objects, bodies and knowledge behave and transform within The Silver Frame. Through performative interaction, the artist would guide the viewer in working for the space, through crystallization of thoughts and matter.

How can Art offer itself as a perspective and method for Science? 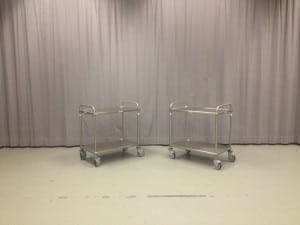 During the week of Science in the City, Performance Artists Inga Gerner Nielsen and Sarah Armstrong worked with their project Embodying Science in an open art residency within The Silver Frame. This being part of the first development of a choreography of different images and figures brought into the laboratory. Some from psychoanalytical theories of science fiction. Others from the History of technological inventions and body modifications of both Science and Art.

The following notes sums up on the actions and findings from the five days in The Silver Frame in Dansehallernes Studio 5. 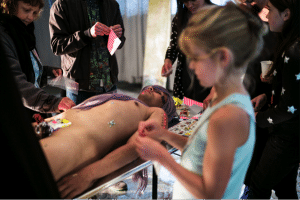 Open Laboratory from 13 till 17-audience participation

Performance Artist Inga Gerner Nielsen announces the offering of Michael Richardt, in the name of Science. His naked body is driven around the festival on a surgeon table while the announcement takes place. Thereafter the body returns to the installation, being placed on another surgeon table. Inga Gerner Nielsen delivers the opening speech about the work as an art-based research project, and Sarah Armstrong, a small introduction to body modification and Performance Art.

The audience is then invited to help start the crystallization process of The Silver Frame by placing hundreds of stickers on the body of Michael Richardt. This developed into an interactive performance, with musical instruments in the space, played by the audience. Drone Techno provided by Tonje Terese and her three music films, The Nefertiti Play, Reality TV and Mother of Pearl, was shown, marking a strong beginning for the week of performance research at the science festival. 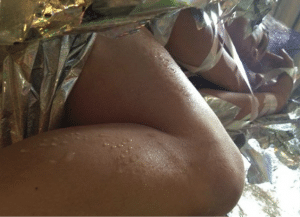 Dissection of The Crystal.

Open Laboratory from 13 till 17-audience participation

Audience wraps up performance Artist Michael Richardt in iridescent tape, till his naked body is looking like an iridescent rock, a crystal. With him he has a microphone. While performance Artist Inga Gerner Nielsen, drives the crystal around the festival on a surgeon table, she announces the dissection of the crystal. Throughout the ride, Michael Richardt talks about crystallization and the amount of pressure it takes to become a diamond. The speech is amplified in the installation, while music films are projected onto the walls. The crystal is then returned to the installation, where the audience is dressed in surgeon clothing and offered to assist the dissection. Throughout the dissection, Inga Gerner Nielsen, directs and guides the audience and participants. The newborn body is the painted blue till awakened, and taken for a spin in the festival. 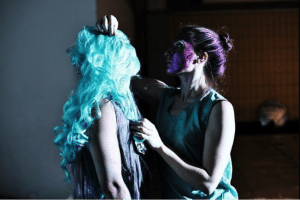 Open Laboratory from 13 till 17 with workshops led by Inga Gerner Nielsen for high school students based in the analysis Technology as Symptom and Dream by Robert D. Romanyshyn. Her exercises in bodily experience of fundamental technological inventions such as Linear Perspective Vision and the Painters Grid stretches the space into straight diagonals lines and squares.

Continuing the physical work with the analysis, Performance Artist Inga Gerner Nielsen continues to explore the invention of The Corps.  The dead body is evoked. Covered in plastic, the audience under guidance from Sarah Armstrong and assistant Sarah Homewood manipulate the dead body, covering her in glitter and placing their iced hands on her cooling body. Needles are put carefully on to her skin, evoking a descendent of Frankenstein’s Monster. The space, which has gone from the linear perspective, breaks up into crystal-like formations.

Michael Richardt attended the Biophilia workshop, an interdisciplinary program about cosmology by the Icelandic singer Björk, which creates a new perspective for him on his work within the realm The Silver Frame. 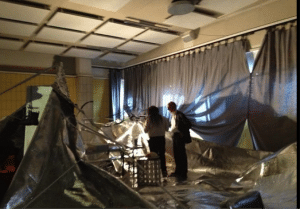 Open laboratory from 13 till 17

Including performance at the Siren, mobile installation by Sculptor Marit Benthe Norheim at Sience in the City, The Male equivalent to The Siren and sequenced fornication by Michael Richardt and live art production by Inga Gerner Nielsen.

Performance Artist Michael Richardt and Musician Tvestan, as the two astronauts having been in space for 14 years, executing a studio 54 inspired party in space, the audience is dressed up like fashionable aliens and invited into the silver frame, which now has transformed itself into a spaceship, through the process of crystallization. The space showed strong audio, lights and creative input from the audience. The finale being Michael Richardt, abducted by the audience and driven around the festival, while reciting monologue on contacting planet earth.

Open Laboratory from 13 till 16

Art based collecting of knowledge, through words in relation to movement, led by Sarah Armstrong. The three Performance Artists visit the Lecture on creativity in science, and the German ESA astronaut Gerhard Thiele pays the Silver Frame a visit. The gestures of his explanations on the challenges the body faces, preparing for space travels, turns out to be the crystalized version of Embodying Science in the Silver Frame.

The future goals for The Silver Frame is

Embodying Science in the Silver Frame, was open to the public to engage in for 35 hours, throughout the 5 day festival, we thank Nxt for your support, that you so generously provided.

Inga Gerner Nielsen develops different artistic concepts of what she calls ‘materializing imagination’.  With her performance group Fiction Pimps she has worked to manifest performance installations as a way to introduce sensuous modes of knowledge production into interdisciplinary projects.

Sarah Armstrong has a foundation as a modern dancer. In the recent years she has been working with theories and artistic practice regarding body modification and dance with an outset in the body as a transforming entity.

The two initiated Embodying Science in order to investigate how scientific questions and choreography can be intertwined and thereby place the body as a focal point in images of future science.

Michael Richardt (DK/NI) works with installation and performance. Through Long Duration Performance Installations with incorporated ready-mades, his works draw parallels to already existing works in an attempt to open to new perspectives to our known world.