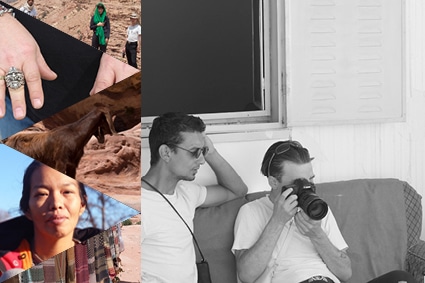 Other Story is an ongoing documentary project, comprised of short films presenting personal stories in a world of monumental change. This is an alternative approach to news media, recording human testimonials based on heart-to-heart dialogues.

Central to Other Story’s work is the belief that stories matter. Stories shape the way we know our world, each other and ourselves. In a time when it is crucial that we change our habits and ways of inhabiting the world, Other Story seeks to encourage this process by sharing the stories of ordinary people, the change-makers fighting for humanity and for the planet.

Characterised as “slow journalism with radical softness” the films evolve from a series of simple questions, such as: What is home? Have you ever been in love? What is water?Responses to these questions are exquisitely relatable and have the potential to reveal much of what makes us human.

Other Story was founded by Madeleine Kate McGowan in 2015. Based at NXT in Copenhagen, and with active members from Denmark, Syria, the US, Afghanistan and England, Other Story seeks to move beyond easy categorization and facilitate the nuance, detail and sensitivity of the individual human story. Through a genuine intention to connect people on a deeper level, the Other Story films are a means to open up the possibility of sensitivity, empathy and awareness, reverberating across nationality, values and culture. The group facilitates an infrastructure for these short films to heighten the visibility of ordinary people, the change-makers fighting for humanity and for the planet. In doing so, perhaps these people, their struggles and their stories are made more visible to the world and to each other, thereby empowering a new global network.