All strive for it – many never get it. Or do they? Companies and, not least, their managers look for the formula that ensures reputational capital, access to resources and a kind verdict from history.

Many wise words have been spoken about respect, but they can be boiled down to one irritating, but correct, maxim: Respect is not something you are given, but something you earn.

In this view lie many truths, which often become part of popular humor’s small bouillon cubes of wisdom. Something you must earn is, first, usually something about a long effort and partly about target groups. Something that is given to you is, in business, often the same as something you invest in. You never get anything out of nothing – except, maybe, the judgment of history. And, in the right circumstances, this may well be: Respect!

Thus, the whole thing bites itself on the tail. Respect is one of the few things you cannot buy, and that’s hard to accept. Many try anyway.

How do others look at you? Is your company respected? Is there respect for your professional effort? You might say that it depends on whom you ask. And that’s right. The target audience for respect may be widely dispersed, and there are probably some whose respect you’d rather have than others.

But market-wise, one oracle is more important than many others: Google. Not because the search-phenomenon itself answers the question, but because the sum of your reputation can be extracted here, and then it’s up to the reader herself whether to label you with “respect.” In addition, it probably won’t be long before a Google-meter, working from a semantic analysis of what others say when they mention you, hands down its verdict in the form of a graph stretching from good to bad to ugly.

It is no longer enough to have only the respect of those you think are important. This springs from the open source ideology, which has spread, via the net’s ubiquity, from the development of software to the foundations for running companies. Lack of respect on the large, open playing field will inevitably affect demand and access to resources. Either slowly or rapidly.

Which playing field you are on is interesting, but the concept is scalable. While a small company in Flensburg or Tunbridge Wells or Peoria may not care what the people of New Dehli think about it, everyone Peoria will know everything they need to know from a simple search.

What earns you respect? Much indicates that respect comes from such classic values as initiative, courage, social surplus, endurance, insight, pleasure, professionalism, influence, creativity and, not least, results in the shape of innovation and profitability.

The problem is that many companies and managers still use only financial numbers to measure global respect – some might add influence, too, but they often confuse that with power.

The interest in gaining respect in the modern sense is increasing quickly, because it’s one of the keys to long-term strategic advantage.

The world’s twenty mostly respected companies are according to the Reputation Institute: 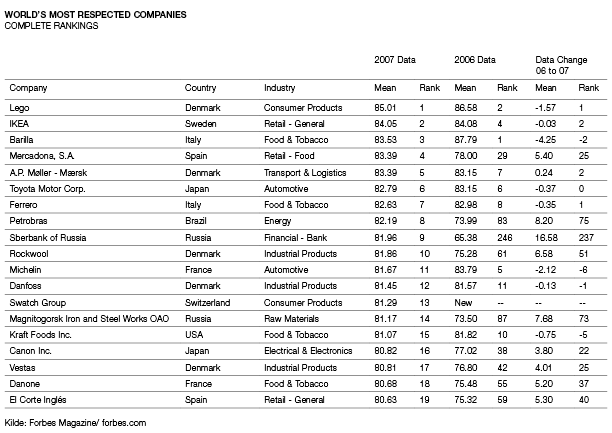 The attentive reader will at once notice that no fewer than five of the companies are Danish, and that only one is American.

The ranking are the partly the result of the methodology, which builds on local data. In other words, a big representative cross-section in the countries the companies call home has been asked to judge the companies. Thus, proximity, history and general knowledge about the company are decisive, and the trend is that the larger a company is at home, the higher ranking it attains. If, it must be noted, it has a good reputation.

The study weighs a range of “soft” factors that are to a great degree values-based. It is carried out in 29 countries among the thousand largest and most visible companies. More than 60.000 people take part in the study are included in the investigation.

Why isn’t Apple, one of the world’s most innovative and leading companies, on the list? Why does it not earn respect?

Apple is a good example of why success does not necessarily earn respect on all fronts. There’s no doubt that Apple commands a huge global fan base, or that Steve Jobs long ago achieved rock star status in the eyes of users and shareholders. But if we look under the surface into the user-driven grassroots environment of bloggers and developers, we find Apple is viewed as a closed, reactionary, even downright cynical company

Best known is Apple’s suit against the web site Think Secret, which was filed in early 2005 and led to a settlement and the closing of Think Secret at the end of 2007. Think Secret was an Apple fan site run by the Nicholas Ciarelli, a Harvard student, and it was known for releasing news about Apple before official news releases. The case developed into a fundamental fight about the degree that online journalism enjoys the same source protection as traditional print journalism. Apple lost two suits on this issue before reaching a settlement with Ciarelli.

That Apple chose this path in an attempt to muzzle the blogosphere earned it a huge loss of respect among that bloggers and Web 2.0 users who today decide corporate reputation, and has sullied the once shiny silver of the famous Mac design.

Another IT giant took the opposite strategy. While Apple was suing its fans at Think Secret, Microsoft appointed journalist Robert Scoble as official “spokesblogger” for Microsoft’s Channel 9 – an open user-powered developer community with direct access to Microsoft’s developers. Scoble was given free rein to be objective, even critical, of Microsoft from with, and his blog, Scobleizer, immediately became on of the most influential in the IT development environment and, not least, one of the most influential blogs in any field.

What is it that makes us Danes love Lego so much that we repeatedly name it one of our favorites and send it to the top of the world’s respect rankings?

Lego fills a huge space in Denmark, and is one of our few truly international brands, with a long and good story. The story of the poor carpenter, who had a good idea and created one of the world’s best-known brands and a huge fortune, is straight out of Hans Christian Andersen.

There have also been negative stories about the company, which zealously guards its name and chokes all attempts at competition. But most of all, there has been great openness about the company’s ups and downs. The story of the grandson who miscalculated, and was forced to leave management, replaced by a young, relatively inexperienced manager, has been followed closely by Danes.

So why do we love it? The company’s huge effect on Denmark’s reputation plays a part. But not least, Lego’s great significance for a whole society in rural Denmark, and its deep social engagement it has shown there have, with the help of several generations of Lego-playing children, made the company a national treasure. In 50 years of history, Lego has clearly proved itself worthy of respect – despite ups and downs on the success curve.

All things being equal, Lego will always own a large place in the Danish consciousness than Apple occupies in the American consciousness, and so will continue to take a top spot in the Reputation Institute’s rankings.

It’s hard to say with certainty what will earn respect for you and your company. But part of the answer lies in the honesty of what you do, and, not least, the story behind it

It does not necessarily need to be a commercial success, for there is much credit in taking the initiative and trying new paths. Commercial success and large earnings are still classic respect-earning factors. But respect increasingly demands repayment to society in the form of social initiatives and unselfish financial support if the positive reputation is to be preserved. The cooperation between two of the world’s richest men, Bill Gates and Warren Buffet, in 2006, to create one of the world’s largest foundation for humanitarian, goals shows the way in that respect.

You get respect if you earn it. But you will be hung out mercilessly if you cheat the scales – and then you will not be able to buy your way back to respect, no matter how much money you have.

This website uses cookies to improve your experience while you navigate through the website. Out of these, the cookies that are categorized as necessary are stored on your browser as they are essential for the working of basic functionalities of the website. We also use third-party cookies that help us analyze and understand how you use this website. These cookies will be stored in your browser only with your consent. You also have the option to opt-out of these cookies. But opting out of some of these cookies may affect your browsing experience.
Necessary Always Enabled

Any cookies that may not be particularly necessary for the website to function and is used specifically to collect user personal data via analytics, ads, other embedded contents are termed as non-necessary cookies. It is mandatory to procure user consent prior to running these cookies on your website.